The following is a blog post simply explaining how and when I fell in love with Spider-Man. 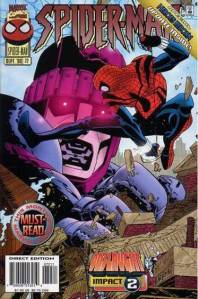 I had always been a big fan of the character ever since my dad brought home a comic book, that was the very early 90’s. It was in 1996 however, when Marvel was at the tail end of the Clone Saga, I began reading Spider-Man comics on a monthly basis. The first issue was dated September 1996 and I stood in the newsagent flipping through the issue. Up until that point, my only real exposure to Spider-Man came from the 60’s and 90’s cartoon series of the same name. The latter of the cartoons where season long story arcs were a popular thing. I think it prepared me for comic books in general. When looking at the cover on the shelf though, that was a very different Spider-Man to what I was use to.

The costume looked different from the cartoon of the 90’s, and in turn the original, and Spider-Man had web shooters on the outside of his costume. The first few pages showed Peter Parker on a building holding a camera watching from a distance as Spider-Man came swinging into frame.

From this very moment, my mind was blown away and that was the moment I decided to buy comics on a monthly basis. Unfortunately even though the issue tried its best to make my entry into the story as easy as possible, so many things were going on, that I had trouble understanding everything. Especially when you consider the issue was placed dead centre of a major story. Not a good point to jump in.

All the backstory, all the exposition dump throughout the issue was just too much for my young mind to understand, and with nothing but the 90’s cartoons to go on, I wasn’t even sure who Ben Reilly was.

Ben Reilly, my Spider-Man when entering the Marvel Comics

Oh yes, Ben Reilly was my Spider-Man when I entered into the comic universe. The man who eventually turned out to be a Clone, was the character I came to love as Spider-Man. Back in 1996, Marvel was publishing an average of four Spider-Man comics a month. Sensational Spider-Man, Spectacular Spider-Man, Amazing Spider-Man and finally, Spider-Man. So four issues a month had me quickly falling in love with all the characters.

Peter Parker was a soon-to-be father and no longer Spider-Man. He had hung up the webs and chosen to prepare for his life raising his child. Mary Jane, was carrying the child, and both were setting up their new life. On top of all that, it had been revealed he was a clone of the original Spider-Man. The original decided it was no longer his life or name , and settled on the name Ben Reilly. Ben after his uncle, and Reilly the maiden name of his Aunt. Look its a very long story and Marvel still cops plenty of flack for the clone saga, but I don’t see why it was any trouble.

Mum and Dad, let me take the time to thank you right here on the internet, for encouraging my reading and allowing me to delve deeper into Spider-Man’s mythology

By years end, I picked up enough hardcovers to get me understanding the backstory of the Spider-Man universe. One hardcover which was purchased for me by my parents, had detailed information on everything Spider-Man. Spider-Man Unmasked, it was a fantastic journey into the universe and a very brief overview of the entire history of the comics. Had history on the character, powers and abilities, web shooters and heroes and villain he often encountered. This was the ultimate read whenever I needed information on anything Spider-Man and made each new issue I picked up that little bit easier to jump into. My knowledge was quickly growing.

You must remember, this was a time before the internet was readily available and if you were like me and did have it, most websites were colourful designs with copy and paste pictures all over. The information listed wasn’t that helpful but it did provide enough to point me in the direction of what was worth buying.

Regular visits to the city or local comic book store allowed me to indulge in the back issues more, but those 1960 issues would never be mine. I had only heard of the origin of Spider-Man, but never read it. Wizard magazine had a list of prices for comics, and the asking price clearly put these back issues out of my reach.

Only a year after reading that first Spider-Man issue (September 96), my birthday came around and my Aunty Pina gave me one of the best presents ever; Essential Spider-Man Vol 1. It collected Amazing Fantasy #15, Amazing Spider-Man #1 – 20 and Amazing Spider-Man Annual #1, all reprinted in black and white in one easy to read collection. Needless to say, I was engrossed in the original Spider-Man stories and even though it was a more simple time in comic books with a very basic format, I happily followed along.

His first appearance, to the famous battle with the Sinister Six. I read as relationships grew and personal problems plagued Peter Parker’s life. My journey continued months later when I picked up Volume 2. He was my superhero and spoke to me on so many personal levels and taught me so much; being a nerd didn’t matter, to be the best person I could be, help others and never being afraid to have a laugh at myself.

Via years worth of back issues, I watched Peter grow up and become a man. Mourned the loss of loved ones, find and eventually marry his true love. Begin the early stages of having a family and then watched as the character was stripped back to the core and started rebuilding all over again from nothing. Typical Parker luck I guess.

No matter the situation, Spider-Man never gives up

Peter Parker, Spider-Man, never gives up and never backs down from any challenge. He was my personal hero and continues to be to this very day. Yes, the character has been mishandled from time to time over the 50+ years, but deep down, the core character has been kept. He prevailed against all odds and proved that doing whatever a spider can also makes you the heart and soul of the Marvel Universe.

This is why I love Spider-Man. Because whether he was single or married, down on his luck or living comfortable (while it lasts), Peter Parker still puts the lives of others before himself. Even when Ben Reilly took over the webs, it was still the same for me. This is why the clone saga never bothered me, Ben Reilly was just Peter Parker without a wife.

At the end of the day, Peter Parker is a hero and lives by the same motto he has since the very first issue; “With great power there must also come — great responsibility.”