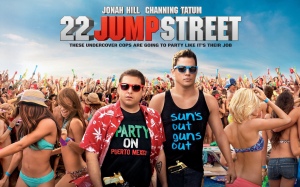 POSSIBLE MILD SPOILERS AHEAD…BUT IF YOU’VE SEEN 21 JUMP STREET, THEN NO SURPRISES AT ALL.

Plot: As the warning above says, if you’ve seen 21 Jump Street, then you pretty much know the outline of this one. A new drug known as Whyfy has been making the rounds and after a student is found dead, 22 Jump Street is put back into operation, with a larger budget mind you. Jenko and Schmidt return as undercover cops and once again they need to “infiltrate the dealers, find the supplier.”

Review: Oh man, I’m not going to lie. There would be little reason in doing that mainly because I’m sure by now, you can trust my judgement. So in saying that, a little background information for you. 21 Jump Street released back in 2012 was a surprise for many people, myself included. Not only did it do extremely well at the box office, but also with the movie going audience.

So after the hit that it was, the studio heads decided to rehash the same idea and make a sequel. The same plot and the same cast but this time with a bigger budget. Going into 22 Jump Street you really need to be aware of those facts. Its a remake of the first film in a sense. Jenko and Schmidt are once again sent undercover, but this time its college.

I don’t think I can say much about the plot, not because of spoilers but simply because the 21 Jump Street did it all before. The writers make no apologies about this fact, nor should they. If nothing was ever said throughout the film, then I’d have reason to be upset, but its said so often that you just accept it and come to laugh whenever its brought up.

Thats what I found so enjoyable about 22 Jump Street. Its self aware. Everything from the budget, the plot similarities (to the first) and the age of the actors is on the table. Nothing is off limits, and for that it gets a hell of a lot of credit.

When it comes to acting, nothing is surprising here. Clearly Jonah Hill and Channing Tatum are having a good time. The chemistry between the two of them is so enjoyable to watch, you often forget its a bromantic comedy as much as it is. Given a slightly larger role this time (and thankfully) is Ice Cube. He is much funnier playing the straight man, and so very glad of the extra scenes outside of Jump Street. He steals the film no matter what scene he’s in and was an absolute pleasure to watch. One scene with Ice Cube had me in tears from laughing so much. Was I embarrassed? Nope, was completely worth it.

Writing is of course smart, and I know its a comedy but that doesn’t mean it can’t be an intelligent script. Its self aware and brings that up all the time, as mentioned. It has many funny moments, but also thats where my complaint is. Same of the jokes and actions are recycled in the sequel, and because I was already familiar with them, they weren’t as funny this time around.

Final Thoughts: At the end of it all, 22 Jump Street is a redo of the first film. A new setting, larger budget and same cast. Jokes may not be as fresh as one would hope, but it doesn’t stop it from being a fun two hours. The chemistry between all cast is top notch and I wouldn’t be against a third film to see the cast together again…but I can only imagine the formula would be stale by that point. So better to end it here.