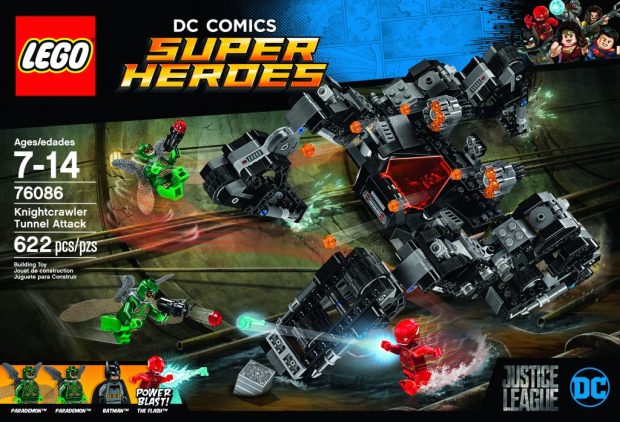 All details mentioned above can make or break a persons purchasing choice. I hope it helps and appreciate any feedback in the comments below. Click on all images for full size HD quality photos and find more LEGO reviews via the drop down menu above.

Mini Figures
In this mid range Justice League set, LEGO has included a total of four mini figures. Batman, Flash and two Parademons with each of the four mini figures coming with their own accessories.

I have complained many times in the past, but in the two years since my last review, LEGO seems to have lifted their game a little when it comes to capes. Batman comes with a fabric cape. Let’s just take a moment here and celebrate that LEGO has not given us one of the crap paper capes that deforms and bends out of shape over a short amount of time. With the Batman mini figure, expect the usual things, light grey body and legs pieces with the usual head brick having the large white stripe across it. Once the moulded helmet piece is popped on though, you get the white eyes showing. The face piece has two expressions, one being angry and the other calm. What I love though, is LEGO has taken the Ben Affleck stubble and printed it on the face itself. Perfect. 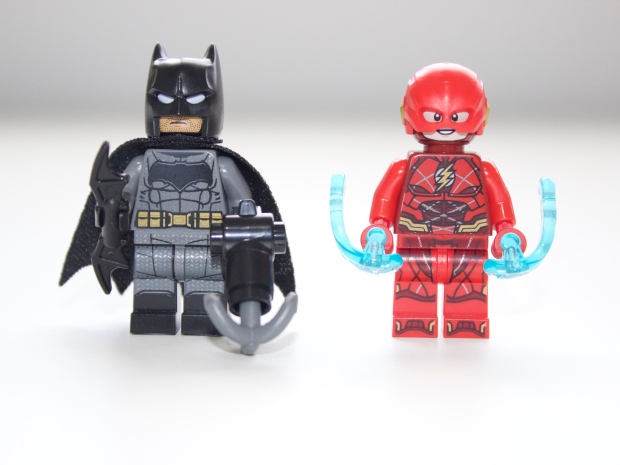 The body piece has printing on the front and rear showing the armour. The black bat symbol prominently sits across the chest with a gold coloured utility belt wrapping from front to back. The leg piece only has printing on the front, but what I absolutely love is the hidden details LEGO has included. When holding the Batman mini figure, you only really notice the dark grey and black colours. However with just the right lighting, you can see the light grey pop from the mini figure. It likes a very cool effect that is hard to see at first, but with a slight adjustment, the entire figure goes from an average 5, right up to an 11. Two accessories finish off the Dark Knight; a batarang and grappling gun.

Next League member is Flash. First of all, not a massive fan of the movie costume used for the Flash, but in mini figure form, it rocks. The bright red leg and body pieces are super detailed with armour plating and zig zagging lines going all over the place. Gold highlights make up the remainder of the colours with a few darker shades of red thrown in for added effect. Pop over to the back, and the armour design carries over with even more intricate printing. Hands down, one of the better mini figures in a long time.

But it continues when it comes to the head and helmet. Flash has two expressions, one happy and one with an open smile. Not much going on until you add the helmet. The new mould has been done to replicate the Justice League film having a pointed back with plenty of edged lines underneath. The gold bolts on the ears are present and look fantastic with them being raised ever so slightly and not simply painted on. The red really stands out and I couldn’t picture Flash having a printed helmet head-piece as is the case when it comes to Spider-Man mini figures.

Flash even has an accessory in the form of a blue lightening bolt he can shoot. By clipping into the hand, you press down against the elbow, and the bolt shoots off in a forward direction. You even get a second bolt as a left over piece.

The two Parademons are less individual than I would’ve liked. Apart from the wing sizing, they are identical. Both have predominately green bodies with plenty of detail on the front and back showing off bones and ribs. The head pieces are have bright red eyes and crusty looking faces. Around the back you get a clear piece with allows the two different wings to sit in place. The wings have some awesome printing on them, showing a scale pattern and almost butterfly look for the bottom portion. For the weapons, the Parademons both have stud shooters with first off a clear red stud by pressing down on the top.

I must admit, I’m impressed with all the mini figures. I didn’t think I would like the Parademons, but they quickly grew on me, and Batman has the scale like body armour which pops out in the perfect lighting. Then we have Flash, who almost takes out the mini figure of the year award, if that is even a thing.

Main Build
Ever since seeing footage of the Knightcrawler in the tunnel sequence from the Justice League film, I knew this was a set that needed to be part of my collection. The film had the Knightcrawler moving like a crab, or spider, able to scale walls and looked menacing. Having purchased the LEGO set, and recently seeing the Justice League movie, this build ended up being a complete letdown.

Knightcrawler with legs down and ready to roll

Now hold on just a few moments, although the build is a letdown, allow me to explain just a little. The entire build is spaced out over five bags. You get four mini figures with the set and a mother box, but most of the bags are relegated to constructing the legs and hinges the Knightcrawler moves on.

Closer view of the interior cockpit with Batman

From the outset, you’ve got a fairly unique design for the vehicle. The cockpit is centralised with a clear red diamond-shaped piece for the glass canopy. The cockpit is predominately black with a few yellow pieces inside for the seat and control areas. Stickers are placed on either side of the seat for the controls, but otherwise you’re looking at a pretty minimalistic cockpit. Only one mini figure will fit inside, and although Batman comes with two accessories, they can be housed on the rear of the Knightcrawler with pegs. The seating position allows the mini figure to rest, rather than sit, and the large red piece cover the top. Frankly, I’m a fan of the design at work. It is a large opening with a firm close and open. You can flip the entire build upside down and nothing moves or falls apart. Super solid, and very well put together.

The front of the Knightcrawler is pretty plain, with a sticker on the front adding some much-needed detail, and colour, to an otherwise dull look. This doesn’t do much for me as the stickers seem like an easy way to cut down on using some extra bricks. Spin it around and the rear fairs only slightly better. As mentioned before, Batman’s accessories can be held on the back separated by an orange clear 2×1 clear brick. Dark grey technic pieces form large mini gun stud shooters, which flank either side of the cockpit and bat symbol (sticker). This is a feature I really like. Great for playing around, I just wish the mini stud shooters had some movement involved and weren’t stuck in place. Especially considering dead centre, you have two clear studs on clips to move up and down.

From the underside, the centre section of the Knightcrawler is pretty boring. A few clear rounded pieces keep the vehicle from scratching any surface, but apart from that, not much else there.

By the time bag two comes around, the build get quickly disappointing. Each portion of the build is a snooze with layer upon layer creating the ‘shoulders’ of the Knightcrawler and then getting to the end, and repeating the build four times. Once connected to the cockpit, they are locked in place by technic pin pieces with no chance of anything moving. Again, you’re playing with mostly black and grey pieces. Some detail is added with moving studs acting as lights, but all in all, rather dull to look at. 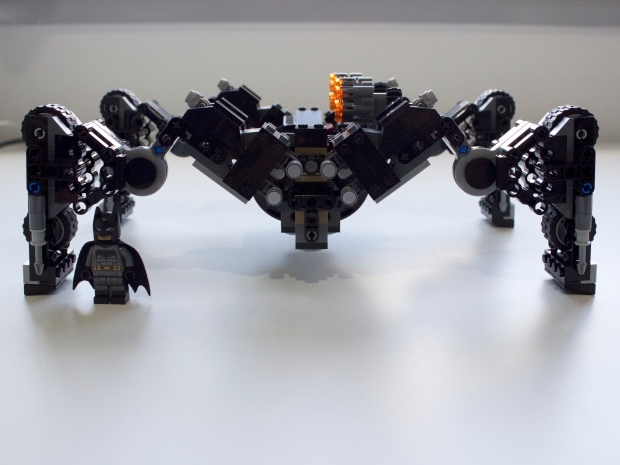 Side view of the Knightcrawler with legs out

The final stage of the main build are the legs. In the movie, the legs are more like tank tread with pincers, but here in LEGO form, they cheapened out giving us two wheels per leg. The legs are technic in design with a solid quality to them. A few harpoons are placed on the sides, which look cool, but lack any sort of function, and large clicking connectors are used to give us the main feature of the build.

You see, not only does the Knightcrawler roll along the ground, but the legs can be positioned so they bend outwards and rest on their tips. Very hard to explain, but the idea is the vehicle can climb vertical walls and move around without the wheels. Obviously this is the movie we’re talking about. In LEGO form, it just looks…different. It has no real function other than to offer the builder another form of play, but only manages to ruin the experiences.

The legs are dull, and with them connected to the ‘shoulders’ which are looked to the cockpit, there isn’t much movement to play around with. The entire build feels like a massive missed opportunity with a unique design failing to actually capture the fun of its film counterpart.

The Knightcrawler actually has a fairly aggressive front, especially when considering it has two mini gun stud shooters on top.

The wheels, although hidden inside the legs, work well, but look really out-of-place. And the use of stickers for detail come across as cheap and lazy on LEGO’s behalf. They lack of any sort of colours other than black and grey that goes with the Batman look, but it only helps cheapen the build. The look isn’t even that appealing. The cockpit front looks a few bricks too short, and the side profile has too much going on.

The Knightcrawler Tunnel Attack family posing for a photo, with Mother Box included

Final Thoughts
While I appreciate the overall build quality, the Knightcrawler was able to survive a drop from a few feet high, the vehicle isn’t something I can recommend. It isn’t overly appealing to look at. Seems like a waste of what could’ve been a much better build, and most important of all, the design is repetitive and lazy. However, if you ever manage to find it on special, I would encourage the purchase as I’m sure others out there would be able to MOC this into something special. As it stands though, we deserve a lot better than the build we got.