Like always, let’s begin this review by mentioning all the above information. Not everyone cares, but for those that do, it can make a big difference. For greater detailed images, make sure to click them and zoom in. 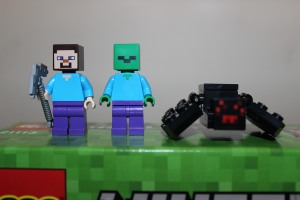 What can I say about the Steve mini fig that hasn’t already been covered in my previous reviews here and here? Unfortunately, not a lot. The now familiar purple legs and light blue torso pieces are here with zero printing save for the open collar on the chest. Everything is fairly accurate to the video game look, right down to the block inspired flat head without stud piece, so forget about trying to connect anything to it. But thats okay, the look is simple and stands great on its own. Sadly, it doesn’t come with any sort of armour pieces. These are only included with the other, more expensive sets. It is a bit of a shame that we only get a single pickaxe here. It looks really good, with a silver look all over. And comes complete with the pixel block look. I’ve been a fan in the past, and continue to enjoy the style of the LEGO Minecraft mini figures.

Can you believe that I’ve been playing Minecraft almost every single day, and it wasn’t until building this set, that I realised the Zombie mini figure and Steve share the same pants and shirt colour. I mean apart from the green colour, they are the same. Mind blown.

In all seriousness though, the Zombie figure is pretty cool. I don’t know why I like it so much, but the plain green block head with minimalistic features is cute to look at. No longer threatening, because he isn’t banging at my door like in the game, the Zombie is just the perfect addition to The Cave. No extra printing on the back of the Zombie, so don’t expect much. Just be grateful LEGO has given a new monster in each new set.

Speaking of a new monster, Spider is the final of the three mini figures. I’m still not entirely sold on the Spider, both in the game and in LEGO form. Much like the animal figures from other sets, LEGO has decided to create unique head pieces with a striking resemblance to their game counterpart. The body is made of numerous brick pieces both flat and double high. Hinge type bricks made up the Spider legs and when completed, it really looks like the game has come to life. The red features on the head piece are all the right amounts of creepy and that suits me just fine.

All in all, I’m happy with the mini figures included here. I would’ve liked a few more accessories for Steve, and maybe even an extra Zombie, but what is given and for the price, I think we lucked out. As much as I don’t like the Spider mini figure, it has nothing to do with the build quality and everything to do with my uneasiness to spiders.

Main Build
For the main build, we get two bags with a decent amount of bricks in each. The first bag is all about building the foundation of the Cave. Three base pieces make up the Cave floor, the small patch of water and lastly the lava. 80% of this bag is made up of light grey pieces to build up the cobblestone formation. Expect plenty of double height square blocks and lots of stacking to quickly build height. At first I thought it was going to be pretty boring, but nope, I was wrong. A fair bit goes into the set and with many different sized grey blocks, you eventually add all the bases together to make the Cave area. Best of all, the base pieces are actually locked together by using different size blocks. Trust me when I say, I tried breaking these areas off from the main Cave, and nothing. A slight bit of movement, but they hold tight. Thanks to LEGO for really making this a sturdy play set.

Much like the flowing water effect in other Minecraft builds, LEGO has here included lava. Orange bricks form the flowing lava to great effect with sloping pieces designed to convey the downward movement. It is such a simple yet effective choice made by LEGO and something every MOC builder should use more of. I love it. As the lava pieces move toward the water pieces, we are actually given two blocks of obsidian. It wasn’t until after I finished the build that I noticed this. I smiled and was very happy this little detail was added. To top it all off, we even get a ladder and a few extra bricks here and there make up gold and redstone minerals for Steve to mine. 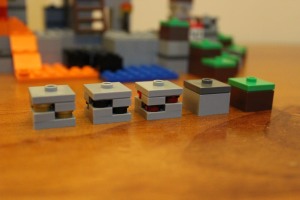 Gold, Coal, Redstone, Cobblestone and Dirt pieces. Just some of the detail this small set packs.

I’m just blown away by all the little details added into the set and bag two adds more. After building your Zombie and Spider mini figures, another base piece is used to house some dirt. Again I love how LEGO has chosen to mimic the look of the video game by use two bricks to make pieces like dirt and cobblestone. It’s these little touches that instantly elevate this set.

Once the dirt area has been completed, it securely locks onto the larger Cave base with no fear of it breaking off. Expect to be making lots of smaller blocks which snap onto the set for extra detail. The ladder piece included isn’t without its purpose. On top of the Cave is a small area where Steve can seek safety. Another chest is included with, you guessed it, another bread piece and two torches to provide light. Got to keep those monsters at bay.

A finishing touch that I rather enjoy is the bucket with handle you can either fill with an orange or blue piece. So your choice of lava or water. Fits in Steve’s hand and makes for some fun playability. The best part of the set is that underneath Steve’s safety area, the Zombie can stay there in the shadows. You can put him anywhere, but I find he works best there. 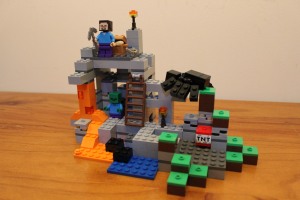 Final Thoughts
If you read my previous LEGO Minecraft review, The Farm, you know I had major issues when it came to the set almost completely breaking apart at the slightest touch, especially when moving it. Thankfully that is not the case here. All my fears from the last build are completely gone here. Everything locks in and holds its place quite well, save for the torches, and the flowing lava and mineral blocks add plenty of fun eye candy and detail.

Easily a Minecraft LEGO set to pick up, with the best price per brick so far.