The Last Jedi, is not a good film.

As the lights in the cinema turned on and the credits rolled, my girlfriend of ten years turned to me with a smile on her face and asked me what I thought. My body was numb and my mouth dry from popcorn.

Rose Tico, possibly the worse character to be introduced series.

My girlfriend’s expression dropped and she admitted her feelings mirrored mine. “That was boring.”

Thoughts raced back and forth in my head. What didn’t I like about this film? Was it the characters, the music, the acting, the effects, the script? WHAT?!

“The music was really good” I added while tweeting that exact line.

As we walked back to the car, I kept on complaining about The Last Jedi. I had issues with the film, major plot points from The Force Awakens were gone, characters were destroyed and I was just angry. If the Force was real, I would’ve gone directly toward the dark side with all my internal rage building up, I was close to breaking something, but I drove home discussing my problems with the film instead.

While jumping in bed, I decided to do the smartest thing ever. I pulled out my phone, opened notes and began to list each and every problem with the film. My intention was to capture my thoughts as raw as they were, then watch the film again after a week and see if I still had the same issues. After all, I was expecting a fair bit considering The Force Awakens left plenty of mysteries to be solved.

After two weeks away from the series, I doused myself in positive reviews in the hopes that any negative thoughts would be washed clean. However I walked out of the cinema once again disappointed and massively let down by this once beloved franchise. I wasn’t happy and the latest viewing only helped solidify my thoughts.

I now hated, The Last Jedi.

Listed below are the notes I wrote while laying in bed only hours after my first viewing of The Last Jedi. I attempted to get all my thoughts written down so that I would be able to sleep. They are random and won’t make sense if you haven’t yet seen the film. It is best to save the link, watch the film and return once you have done so. I may at some point elaborate on my points here with longer, more detailed thoughts…but only if the interest is there.

I just don’t know how I feel anymore about Star Wars as a whole. While I like the Original Trilogy and love the Prequel Trilogy, I cant help but admit my faith in Disney, Lucasfilm and now the series as a whole has been shaken to the core.

The Last Jedi, while visually marvellous, did little more than divide the fan base, I would say even more than the inclusion of the Prequel Trilogy. While people may not have enjoyed them, I for one can’t pick anywhere near the amount of faults as I can with this single film. It has destroyed mythology, characters and retroactively ruined the previous films. 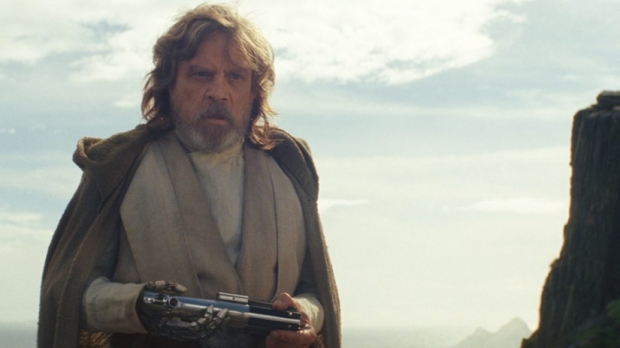 This should have been a powerful moment, but now, pointless.

when it came to the Prequel Trilogy, George Lucas had a rough outline as to where the story would begin and end. People may not have liked the films, but they were original and introduced so much good to the series.

From what we can postulate, Episode VII hadn’t even finished filming when Rian Johnson was writing the script for Episode VIII. Mark Hamill has come out and said the ending of The Force Awakens had Rey meeting up with Luke, who was using the Force to levitate rocks around him. Obviously showing his growth in The Force. However Rian Johnson didn’t know this and had Like cutting himself off from the Force. Something minor, but a massive insight into the way this series is progressing.

Clearly not enough time was left between Episode VII and VIII for the writer/director to see the previous film, speak with JJ Abrams and work out a plan of where to go next. And this mainly falls on Kathleen Kennedy, who as head of Lucasfilm, should’ve had strict rules as to where the series was going before even moving the series into production.

We have to remember the series banished all expanded universe content before The Force Awakens went into production. This allowed the writers group freedom to create new stories and not be tied down to previous threads. I’ve said before that I agree with this choice on a level, but when Lucasfilm can’t even stick to this themselves and allows directors to just come up with a story that is so outlandish and bad, then I have to begin to wonder what the hell is going on at Lucasfilm and Disney.

The big question is, will I watch Star Wars Episode IX?

If I answer that question here, will it really make a difference what I do when the film comes out? You see, I’m at breaking point with the Star Wars franchise, and right now, I just can’t answer that question. Episode IX will come out in December of 2019, so that leaves plenty of time for Disney and Lucasfilm to win me back. Actually, they will be doing a lot of work to win back all the fans they screwed over, because The Last Jedi is NOT a good film.